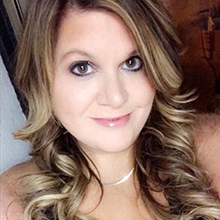 “You have not failed until you give up.”

Courtney Luper is an inspiration to all who know her. She is an example of how sacrifices, consistency and a big heart helped her win BIG in business and in life - despite the odds stacked against her.

Courtney Luper was a high school dropout and single mom who was about to get evicted.

In March of 2013 as a last resort, she joined her first network marketing company. Then ONE social media post changed everything…

Just a few months after joining, Courtney Luper went "viral" on Facebook for the first time. A simple 'DIY' post skyrocketed to over 775k shares in just a couple days.

Within the next 12 months, Courtney paid CASH for her home – the same home she had a pending eviction for the day she joined her company. She was featured on LifetimeTV twice, took her family on vacations, purchased her dream car, and had made thousands of personal sales - earning multiple six figures.

Today she is a Million Dollar earner at her company, a top network marketing leader and has almost 2 million followers on Facebook!

As a relatable, REAL, small town girl with a HUGE heart, big smile and youthful laugh, Courtney loves encouraging and giving hope to those who need it the most.