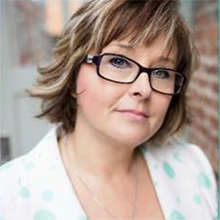 Sometimes, all it takes is a gentle nudge from someone else to get you to see the greatness you are carrying within. That certainly rings true for Angel Fletcher, who has become one of the most influential and successful women on the global network marketing and direct sales stage today.

Like many, Angel sometimes felt the opportunity to have a better life was always just out of reach. As it turned out, a new life wasn’t out of reach at all; it just wasn’t part of her conscious plan.

Angel recalls a visit from her mom on the day before on Thanksgiving, a few years ago. Angel had just started taking supplements that summer, along with her critically ill daughter, who was on chemo and battling depression. Wearing baggy hospital scrubs while she prepared Thanksgiving dinner, Angel emerged from the kitchen to greet her mother. “My mom took one look at me and said, ‘Girl, you have to get some new clothes!’” Angel says. “My mom took over in the kitchen and sent me to the bathroom scale to weigh myself. I’d lost 77 pounds! I was so focused on my daughter that I’d lost me.”

That Thanksgiving was a turning point for Angel. “Looking back, the mile markers that really matter to me didn’t have anything to do with making money, or even with losing weight,” Angel says. “What mattered to me most was becoming a new person, and then actually gaining the insight that I was changing. My entire life was changing, and initially, I wasn’t even tuned in enough to notice.”

Her mother’s observations of that Thanksgiving set in motion a new vision, where Angel felt she just might reach out and grasp a new reality. It didn’t come easily, though. Shortly after her mother’s visit, Angel walked by a secondhand store and saw a cute dress hanging in the window. “I thought, ‘There’s no way I am going to get into that,’” Angel says. But with her mother’s words in mind, Angel I went in and tried it on. “I went to a clerk and asked where the mirror was, and she said, ‘You just passed it!’ I had walked by the mirror, glanced at the reflection, and didn’t even recognize myself!”

Those, Angel says, are the mile markers that changed her trajectory. It was the beginning of a new world, a new reality, and way to a new healthy life. And she wanted to share it with everyone who crossed her path.

“I could go make money anywhere,” says Angel. “But there are only a few things in this world as rewarding as taking someone’s health and empowering them to become the person you know they can be – that they know they can be. There’s no other place where you get that kind of reward, on the level where it affects your soul.”

Success looks different to everyone. And inspiring people to do their best, to be the best versions of themselves, is what moves Angel to action.

In her mind, money doesn’t motivate that kind of drive. When her current company announced in its first year that Angel was their first million-dollar earner, she actually calculated how many people she had helped. To her, that was a more powerful number than the dollar figure. What drives Angel now is a passion to help others live healthier, happier, and more financially free lives. She is a strong believer in putting a personal touch on every business relationship, which is key to setting a new distributor up for success.

Driven by an intense love and belief at first in her daughter, then in herself, and now truly in anyone who crosses Angel’s path, she is inspired to help people be the best versions of themselves.

In her first foray into network marketing, Angel went to the top rank in the company, and did it in 364 days.

Once she reached that milestone, Angel realized she wasn’t a good fit for that company. It was a very emotional experience, reminiscent of a first love and first heartbreak. “But it also brought me to the place of really realizing the skills and power I did own,” Angel says. “I had success because I took action, followed my heart, learned the skills I needed to learn, and took ownership. I was successful because I am present in my own opportunity.” Angel found her beautiful life because of the realization of getting to the top and realizing she had greater things to accomplish on this earth. “I was at the company’s top, not my top,” Angel says. One of her goals is to empower other women in network marketing to acknowledge their own strength, power, and influence, and to own their success.

Now in her second network marketing company, Angel has once again reached the top, made it there first, and broken every record. But getting there this time wasn’t half as important for her as was mentoring her team and particularly her partner Ryan, who is closing in on being first to reach the new top level of their company. “Taking a back seat and serving someone is the truest form of leadership,” Angel says. “It’s amazing to see the people I’ve worked with conquer new heights and create their own mile markers.”

"I truly believe that by impacting the world by simply being a good human and showing that people matter, success can be achieved by all."

Favorite Quotes: "I never dreamed of success, I just worked for it." ~ Estee Lauder